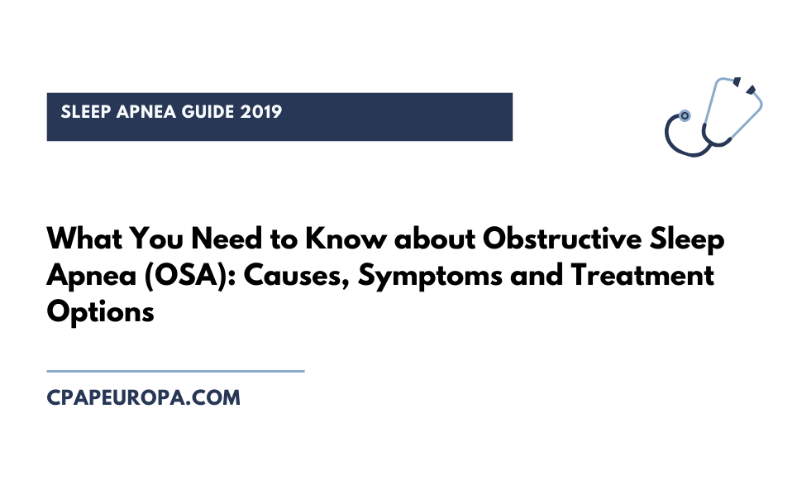 What is Sleep Apnea?

The most common form, OSA, is characterized by frequent stops of breathing during sleep, when the muscles in the back of the throat temporarily relax and as a result block the airway.

When occurring at night during a night’s sleep obstructive sleep apnea blocks the airways completely or partially, usually stopping the sleeper’s breathing for 10-20 seconds. The blocking causes a sudden drop in blood oxygen levels while the sleep apnea events themselves cause the brain to “wake-up”, re-activate and trigger frantic panic signals to the body, so as to make the it to resume breathing (the so-called micro awakenings).

Most people do not remember brain-induced micro-awakening during REM and non-REM sleep. When apneas occur more than 30 times per hour, the result is a complex negative impact on our sleep cycle and the very functioning of our bodies.

Sleep apnea may occur spontaneously as we age, or it can be drug-induced by medications containing 5-hydroxy tryptamine molecules. It can also occur mechanically as a result of asphyxia. Another cause of its occurrence are throat traumas and neurological disorders.

What are the symptoms of obstructive sleep apnea?

Some of most common symptoms of a OSA include sudden awakening (caused by a feeling of asphyxiation or shortness of breath), restless sleep, sleeplessness, and lack of energy during the day.

What are the complications of obstructive sleep apnea?

Just like many other serious health disorders, OSA comes with it an array of complications and side effects. 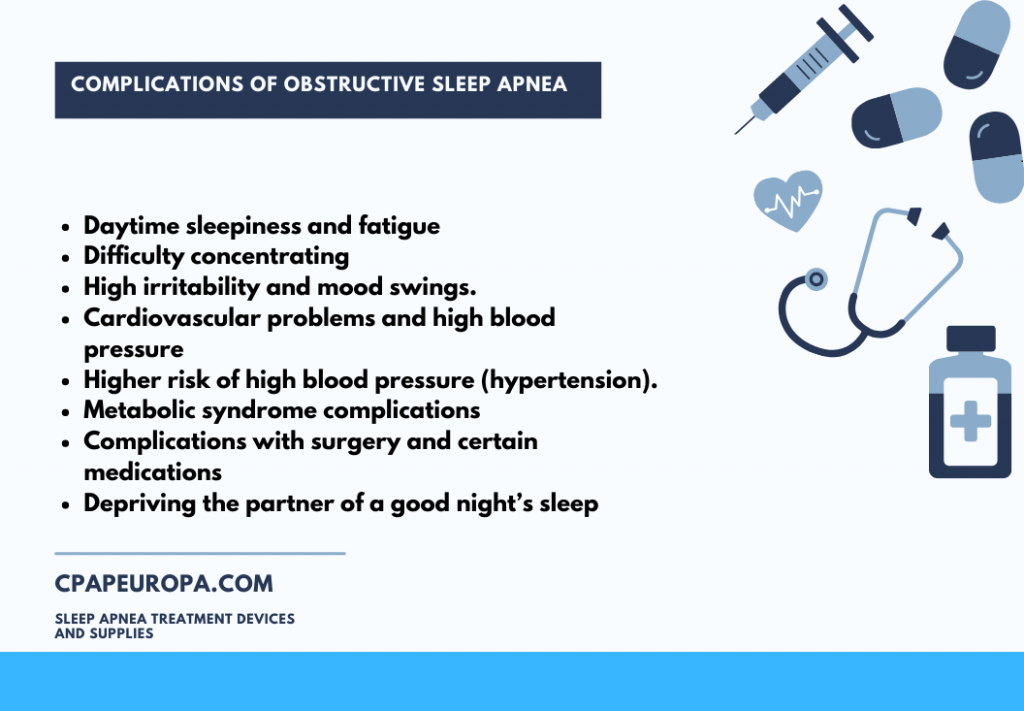 The numerous awakenings at night that are caused by sleep apnea interfere with our normal restorative sleep, leading to our bodies feeling fatigued. Drowsiness, sudden mood swings and irritability are common side effects of the disorder.

Due to the dysfunctional restorative sleep at night, people suffering from obstructive sleep apnea often experience difficulty at concentrating during the day. Vehicle operators requiring high level of concentration, may suffer from sleep apnea side effects that could have a direct negative impact on their accident reaction response.

Irritability and mood swings are other common side effects of sleep apnea as a result of the lack of good night’s sleep and the inability of the body to restore itself.

Obstructive sleep apnea could increase the risk of recurrent heart attacks, stroke, and cardiac arrhythmia. In the presence of heart disease, low blood oxygen levels can lead to sudden death triggered by arrhythmia.

OSA increases the risk of developing insulin resistance in patients with type 2 diabetes.

Metabolic Syndrome, also called “Syndrome-X” and is caused by a combination of risk factors such as high blood pressure, high cholesterol levels, blood sugar, and big waist circumference. The syndrome is associated with increased risk of cardiovascular disease directly correlated to sleep apnea.

OSA is a factor affecting drug intake drugs and patients undergoing general anesthesia. OSA also can make it more difficult to regain consciousness after surgery. This is why it is important to inform your doctor that you have apnea before undergoing a planned operation.

Snoring often keeps our partners from getting a good restorative sleep.

What are the risk factors of obstructive sleep apnea?

For central sleep apnea the main risk factors are: age (occurs often in the middle-aged or elderly), sex, medical conditions (such as heart or kidney problems), use of certain drugs, some neurological problems. 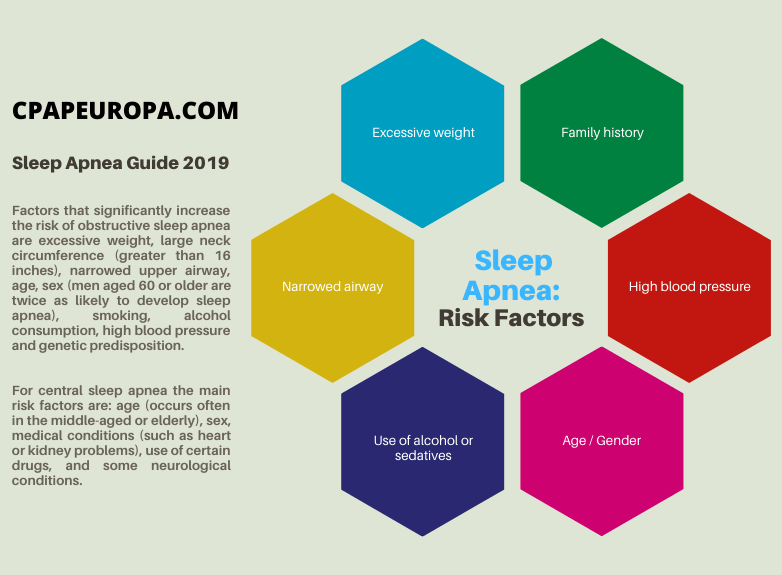 With OSA the breathing cessation occurs when the soft tissues of the upper respiratory tract and tongue relax preventing normal breathing. But there also another factor acting a sleep apnea catalyst – our position during sleep. Positional sleep apnea occurs (POSA) when the breathing events occur when we sleep in a certain position. In the majority of cases, POSA occurs when we sleep on our back, with the head in an upward position.

The data from the midnight analysis is then downloaded and interpreted by a doctor, who would analyze your Apnea–Hypopnea Index (AHI). AHI will indicate the severity of your apnea as it represents the number of apnea and hypopnea events per hour of sleep. If AHI shows that there have been 5-30 events per hour, this would indicate the presence of mild to advanced sleep apnea disorder. An AHI over 30 stops per hour would indicate that the disease is in an extremely advanced stage. This means that you should seek help as soon as possible.

What are the best treatment options for obstructive sleep apnea?

The best sleep apnea treatment has always been the continuous positive airway pressure (CPAP) therapy. CPAP devices come in two variations – standard or automatic – and are the preferred method for treating OSA at home. CPAP machines deliver constant pressurized air to nose through a hose and mask. By increasing the air pressure in your throat CPAP machines keep your airway always open, maintains normal oxygen levels in the blood and preventing constant micro-awakenings. This type of personal treatment tailored to your specific condition has been proven to be the most effective method for treating the condition.

Alternative treatment options for OSA include

In addition to the most effective treatment that is PAP therapy, there are a number of alternative treatment options for OSA with varying effectiveness depending on apnea severity and patient anatomy. Here are the most popular ones:

Is surgery for sleep apnea effective?

Although the vast majority of people with sleep apnea tend to choose the non-invasive treatment that CPAP machines provide, surgery options also exist. Operative treatment for OSA is usually applied in extremely dangerous cases where standard CPAP treatment does not help. Interventions may may include:

Before deciding on a surgical intervention, by all means consult with your doctor in order to learn if surgery is actually necessary.

Each of these surgical procedures has its risks and cons when addressing of the condition. This is the primary reason for OSA patients to prefer treating sleep apnea non-invasively with CPAP devices.

If you still have any further questions OSA, the way to diagnose it correctly or about the best treatment for you, please do not hesitate to contact us and ask.

Modern CPAP machines are quiet and intuitive devices that intercept snoring sounds and apnea events. When these events are detected, the device begins to supply customized flow of oxygen to counteract them. Once the optimum level of pressure has been reached, the machine starts maintaining the optimal level for some time, then reduces it and “waits for” until the next sleep apnea event.

Why use CPAP instead of seeking other methods to treat your OSA?

An increasing number of scientific studies in 2019 have shown that obstructive sleep apnea is increasingly being associated with memory problems, impaired congitive function and poor decision-making. The use of modern CPAP devices reduces the risk of cardiovascular disease and prevents gradual damage to the brain due to insufficient supply of oxygen. OSA treatment with CPAP devices is the most effective way to achieve normal memory function through a healthy night’s sleep. In addition, it has been scientifically proven that CPAP therapy reduces the risk of stroke, heart attack and type 2 diabetes.

What is the difference between CPAP, APAP, BiPAP, and VPAP devices?

APAP machines, just like CPAP ones, are non-invasive treatment for sleep apnea, delivering pressurized air via a nasal or a full-face mask. The abbreviation APAP stands for Automated Positive Air Pressure, based on the same technical principle as CPAP machines.

BiPAP devices (short for Bilevel Positive Airway Pressure) and have a very similar function to CPAP machines in that they supply optimized pressure to keep the airway from collapsing, helping you breathe easily during sleep.

VPAP stands for Variable Positive Airway Pressure. VPAPs are auto-adjusting and very similar to BIPAP machines. They provide pressure to match the patient’s natural breathing pattern while preventing cessation of breathing caused by obstructive sleep apnea events. The major difference between VPAP and BiPAP machines is that the former can be used to treat other sleep disorders as well as some forms of lung disease.

Dry mouth is the most common complication, especially when exacerbated by the use of nasal masks, and when the sleeper’s jaw drops during sleep.

Consult your physician if any of these side symptoms during your CPA therapy, considering how important it is to adhere to it in order to benefit from a successful sleep apnea therapy.

How to get a CPAP device tailored to my pressure needs?

Purchasing a CPAP device is one of the most important steps in starting successful sleep apnea. It is important to invest in the right device for your specific condition and prescribed pressure. When looking for the best CPAP on the market, make sure to go with a licensed distributor of CPAP machines carrying the world’s biggest brands and their tried-and-tested models.

As a specialized CPAP store, we are an authorized retailer of well-established manufacturers of CPAP equipment and supplies – such as ResMed, DeVilbiss, and BMC.

As a trusted retailer we provide our customers with a wide choice of standard and automatic PAP devices and masks for your specific type and stage of sleep apnea!

Sleep apnea is a serious disorder that not only often remains undiagnosed and untreated, but can also lead to extremely serious and dire consequences.

Word origin of the term

The term “apnea” derives from the ancient Greek word “breathless” (Gr. Apnous > apnoia > apnoea) describing the temporary suspension of breathing during sleep. The ancient Greek definition of the disоroder reflects the condition in which the breathing muscles block the airflow to the lungs.

(Apnea, in the classical sense of the term, may also appear in times of distress, negative emotion and during crying). 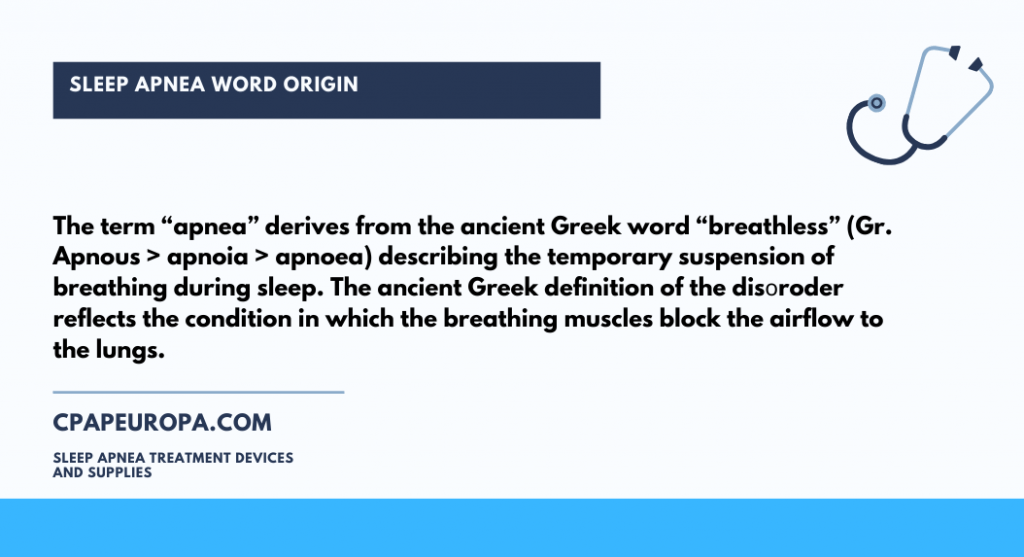 At CPAPEUROPA we are dedicated to providing the largest selection of CPAP equipment and supplies to Sleep Apnea patients in every European country!

Any cookies that may not be particularly necessary for the website to function and is used specifically to collect user personal data via analytics, ads, other embedded contents are termed as non-necessary cookies. It is mandatory to procure user consent prior to running these cookies on your website.